For the past year, I have been learning Italian, practising a few words every single day, using an app called Duolingo. (In fact I started more than a full year ago, but the app allows for me to take short breaks from time to time.)

Apart from 1,500 words of vocabulary, here are a few things I've learned about the process and about myself over this period.

Why did I choose Italian? No greater reason than I love visiting Italy.

I don't think learning Italian is likely to make a difference to my career prospects. I recognise that there are many other languages that I could have picked that would be more useful in a globalised economy. Yet Italian is the fourth most-studied language in the world.

Surely most students of Italian have chosen it with their hearts, rather than their heads. Like many of them, I have been seduced by the place. I have an ill thought-through fantasy that I will take early retirement to buy a little farmhouse in Umbria, where chickens roam freely among the vines and where I can press my own olives.

At this point, I was going add a little "top ten" list to explain why I love Italy so much, but I can't realistically limit myself to ten items.

But it's worked. I've stayed motivated. I've graduated from an audio course, to a phrase-a-day calendar, to daily lessons.

My wife, by contrast, did well at first but didn't stick with Italian. But she's now found a different language that she's interested to learn, and has her own motivations for doing so - and has notched up a very good run already. 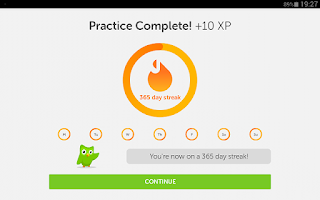 The Duolingo app is actually kind of basic - a small selection of different types of exercise. Its success is down to two things: first, a thoughtfully graduated selection of vocabulary along with a successful algorithm for selecting words to be practised; and second, gamification.

Gamification means that the app treats learning like a kind of game, with rewards for completing particular tasks. The gamification elements of Duolingo include Experience Points, Levels, Badges, and a virtual currency. The virtual currency, called Lingots, is, of course, totally worthless in the real world, as are the virtual things that it buys.

For me, the most important gamification element is the "streak": a simple count of the number of consecutive days that I have reached my daily goal. That now stands at exactly one year. I am disproportionately proud of this fact and I would genuinely be crushed if it were to reset for some reason. For me, that's all the motivation I need to make sure that I do a small amount of practice every day.

And the instruction method itself does, indeed, work. I am certain that I am retaining more information through brief daily practice sessions than I would do if I tried to study for a full hour, once a week.

The Duolingo experience on desktop is quite different to that provided by the app. Using both together is ideal. The mixture of reading, writing and listening exercises is genuinely helpful. I now find that I can do many of the translation exercises solely by listening to the Italian, rather than reading it, which is a good confidence boost.

I was much less successful in my first attempt to learn Italian using an audio-only course. I could parrot particular phrases, but without being able to see the sentence written down, I had no hope of understanding the grammar or even picking apart individual words in the given examples.

Italian is an easy language

I studied French and Latin at school to GCSE level - admittedly a long time ago. Italian's vocabulary is very similar to French and is, of course, ultimately derived from Latin. And, barring a few "false friends" and irregular constructions, Italian often frequently overlaps English. So it's actually a pretty straightforward language for me to learn. I am under no illusions that this is typical; a language such as Japanese would be at least an order of magnitude harder.

I'm still not fluent (and probably never will be)

Duolingo includes a score of fluency, but even Duolingo's biggest fans ridicule and ignore it. I am at a score of 42% but, with a vocabulary of less than 2,000 words, I do not believe this has any real-world meaning. In point of fact, I very seriously struggled to converse in Italian during a recent holiday.

This is likely to be a significant problem with learning any language without interaction with other speakers. Identifying and translating short sentences, even ones with idiomatic meanings, are far easier in isolation than in the context of an actual conversation.

I have maintained my year-long "streak" despite some pretty significant life events over the past year, and despite being stuck in some unexpected places for both work and leisure. However, the successful streak means that I can say with certainty that I have had daily access to a WiFi connection, and that I have had my tablet to hand for at least five minutes every single day.

I may not be as wedded to an always-on Internet as some in the Millennials generation, but nor have I been without it for more than 24 hours.

I'm unbelievably risk-averse (or the app doesn't understand my motivations)

After a recent update to the app, I am now offered a daily wager: bet Lingots against maintenance of a week-long streak. On the face of it, this is a great deal - I'm already very highly motivated to maintain my streak, so this should just be a guaranteed little bonus. Yet I never take the bet.

We could speculate that I have an exceptionally low tolerance for risk. But actually, the truth is, I don't care at all about winning a few extra Lingots. My motivation lies elsewhere. I think it's great that Duolingo continues to experiment with different ideas, but not all its experiments are successful. I don't think that this wager adds anything to the learning experience. Similarly, there is now a tendency to interrupt lessons with a screen that is intended to be motivational ("Three in a row! Well done!") but actually this just gets in the way; I expect this feature will be quietly dropped in a future update.

It's almost impossible to learn when tired

It's obvious that our mental faculties decline when we are tired, but learning with Duolingo has provided me with solid evidence of just how useless I am at the end of a long day. When tired, I will typically elect to do a practice lesson rather than study new vocabulary. Generally, if I undertake a practice lesson before about 9pm, I can complete it with few or zero mistakes. But if I leave it just a little later - 10.30pm, say - then I might make errors on more than half of the exercises. Some exercises I will get wrong even after being shown the correct answer.

This trend is so stark that it has me wondering about other activities that I might attempt when tired. For example, is it safe to drive if my error rate has gone up to this extent? And beyond what point is it counter-productive to stay late at work?

David A
Imagination of a poet - communication skills of an engineer. In no particular order, I like old cinemas, Japanese gardens, playing music, giraffes, technology, films, ducks, narrow Italian streets, and trying to write stuff that's interesting to people. I've been blogging irregularly since 2005 and have had some form of website since 1998.